The Lion of the Senate?

“While the deep concern of a woman bearing an unwanted child merits consideration and sympathy, it is my personal feeling that the legalization of abortion on demand is not in accordance with the value which our civilization places on human life. Wanted or unwanted, I believe that human life, even at its earliest stages, has certain rights which must be recognized—the right to be born, the right to love, the right to grow old."

“On the question of the individual’s freedom of choice there are easily available birth control methods and information which women may employ to prevent or postpone pregnancy. But once life has begun, no matter at what stage of growth, it is my belief that termination should not be decided merely by desire."

“When history looks back to this era it should recognize this generation as one which cared about human beings enough to halt the practice of war, to provide a decent living for every family, and to fulfill its responsibility to its children from the very moment of conception."

Of course, immediately after the infamous Roe decision, Kennedy reversed his position. He became the Senate's most ardent defender of abortion on demand. Over the course of nearly four decades, he was responsible for the widest expansion of the pro-death, child-killing agenda in American history.

Alas, the man many are now lauding as the "Lion of the Senate" was anything but the principled, courageous defender of the least and the last that he first set out to be.
Posted by gileskirk at 4:39 PM

A Whiff of Totalitarianism

What Plays in Peoria 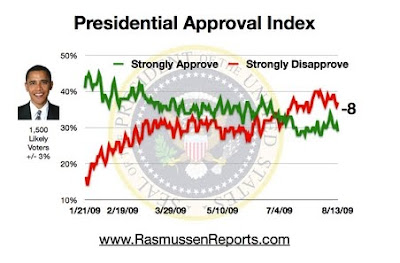 Posted by gileskirk at 9:25 PM

Paying for the Ever-Widening Holocaust

President Barack Obama has made it mandatory for every American taxpayer to participate in his massive escalation of the Abortion holocaust by opening up a new federally-funded market for body parts.

That is the gist of "new ethics rules" the president mandated for the National Institutes of Health this past week. Obama reversed protections that prevented the funding of new stem cell research destroying human life.

Ironically, such research has yet to help even a single patient, unlike adult stem cell research--which has helped patients with more than 100 diseases and medical conditions and which the Bush administration supported with hundreds of millions in federal funding.

Thus, while opening the door to the purposeful creation and destruction of human life for scientific experimentation, the new guidelines simultaneously divert funds away from that research which has already proven to be so beneficial.
Posted by gileskirk at 3:25 PM