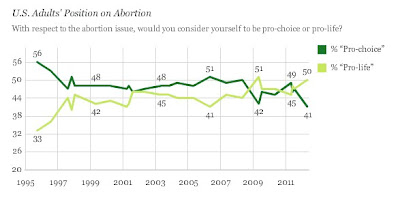 Instead of garnering him electoral support, President Obama's extreme pro-abortion rhetoric and policy-making may be becoming a substantial liability.

According to a recent Gallup Poll the number of Americans who self-identify as "Pro-Choice" has hit a record-low at just 41%. Meanwhile, self-identifying "Pro-Life" Americans now hold a nine-point plurality at just above 50%.

So, the president's ardent support of Planned Parenthood may well turn out to be the Judas Kiss for his re-election campaign.
Posted by gileskirk at 8:29 AM

Posted by gileskirk at 9:32 PM

After 96 years, the global abortion conglomerate Planned Parenthood is still targeting the children of minority groups for elimination--remaining true to the Eugenic ideals of its founder, Margaret Sanger, who brazenly dubbed them "Human Weeds."  Indeed, 79 percent of Planned Parenthood's abortion clinics are located in or within walking distance of black and Hispanic communities. “Minority communities are the number one targets of Planned Parenthood,” said Arnold Culbreath, director of Protecting Black Life. “It’s no wonder abortion remains the leading cause of death among African-Americans, higher than all other causes combined. Getting this information to as many people as possible is not only critical, it’s a matter of life and death for countless babies and oft times even their mothers.”
Posted by gileskirk at 8:55 PM 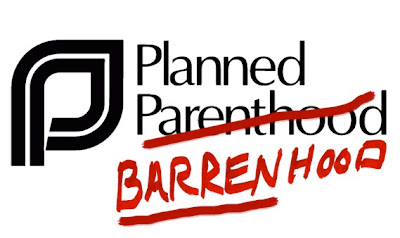 With the news that Planned Parenthood has launched aggressive attack ads against George Allen and Mitt Romney, I immediately thought of the quip of Thomas Chalmers:

"There is honor in the distinction of being disdained by the wicked and ignorant, for quoth the poet, 'A courtier's curses are exalted praise.'"

Planned Parenthood is the world's oldest, largest, and best-organized provider of abortion and birth control services.  From its humble beginnings around the turn of the century, when the entire shoestring operation consisted of a two-room makeshift clinic in a run-down Brooklyn neighborhood staffed by three untrained volunteers, it has expanded dramatically into a multi-billion-dollar international conglomerate with programs and activities in 134 nations on every continent.  In the United States alone, it employs more than 20,000 staff personnel and volunteers in 922 clinics and 167 affiliates in every major metropolitan area, coast to coast.  Boasting a national office in New York, a legislative center in Washington, regional offices in Atlanta, Chicago, Miami, and San Francisco, and international offices in London, Nairobi, Bangkok, and New Dehli, the Federation currently earns more than  $35 million per annum with more than $200 million in cash reserves and another $150 million in capital assets.  With an estimated combined annual budget--including all regional and international service affiliates--of more than a trillion dollars, Planned Parenthood may well be the largest and most profitable non-profit organization in history.  It is undoubtedly Abortion Inc.

But that is hardly all Planned Parenthood is up to.  Utilizing its considerable wealth, manpower, and influence, Planned Parenthood has muscled its way into virtually every facet of modern life.  It now plays a strategic role in the health and social services community--and plans to figure prominently in any and all health care reform implementation and enforcement. It exerts a major influence on education--providing the majority of sex education curricula and programs in both public and private schools.  It carries considerable political clout through lobbying, legislation, campaigning, advocacy, and litigation--coordinating the substantial efforts of the multi-billion dollar abortion industry.  It is involved in publishing, broadcast media production, judicial activism, public relations, foreign aid, psychological research counseling, sociological planning, demographic investigation, pharmacological development, contraceptive distribution and sales, mass advertising, and public legal service provision.

What makes the travesty of this massive enterprise all the more noxious is the fact that a vast proportion of Planned Parenthood's funding at every level--from the local level to the international level--comes right out of the American taxpayer's pocket.  It has become for all intents and purposes an unofficial--and thus unrestrained and unrestricted--branch of the federal government.

We're paying Planned Parenthood's bills while it fulfills its sordid aims and agendas.

Thus in truth, Planned Parenthood is the greatest of all the modern, corporatized, conglomerated courtiers.  And, it is a distinct honor to be singled out for scorn by it and its brazen minions.