File this one in the You've-Got-to-Be-Kidding-Me Department: the Southern Poverty Law Center has now listed most of the nation's most prominent and respected pro-life, pro-family, Christian organizations on its roster of dangerous "Hate Groups."

According to Gary Cass, of the Christian Anti-Defamation Commission, "The SPLC has been reduced to a far left propaganda organization that uses hype and hysteria to enrich a few liberal attorneys at taxpayer expense and has long out lived its usefulness."

Indeed. In fact, increasingly the SPLC has itself become so entranced by its marginal prejudices against Christians and Conservatives that it may very well qualify as a "Hate Group" itself--in accord with its own definition.

Surely, they've set themselves up to be "hoisted by their own petard," as Shakespeare might put it.
Posted by gileskirk at 3:20 PM

Now Groping at an Airport Near You! 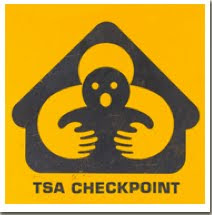 Posted by gileskirk at 2:03 PM

In the two decades since this landmark book was first published, four different presidents have occupied the White House, seven justices have come and gone on the Supreme Court, and eleven sessions of Congress have held sway in the Capitol.

These federal magistrates have faced economic booms and busts. They have weathered terror attacks and foreign wars. They have witnessed the collapse of the Soviet empire and the rise of the al Qaeda menace. They have wrangled over corporate bailouts and health-care reforms. They have endured Tea Party protests, campaign scandals, personal embarrassments, and policy failures. They have been plagued on every side by mounting demands, frustrated expectations, declining resources, and diminished prestige.

Through it all, the divisiveness of the abortion issue has remained constant. The many and varied political turns of events during the past twenty years have done nothing to ameliorate it—much less, to resolve it. If anything, the divide over abortion has become more pronounced, more acrimonious, and more entrenched. While political gridlock on nearly any and every other issue ultimately has been overcome, no rapprochement on the issue of abortion is anywhere in sight.

Of course, matters have not exactly been helped by the fact that the politically protected international abortion business has grown into a multibillion–dollar industrial complex. Utilizing its considerable wealth, manpower, and influence, the abortion industry has proven itself adept at muscling its way into virtually every facet of modern life. It now plays a strategic role in the health and social-services community. It exerts a major influence on education, providing the majority of sex-education curricula and programs in both public and private schools. It carries considerable political clout through lobbying, campaigning, advocacy, and litigation. It is involved in publishing, broadcast media production, judicial activism, public relations, foreign aid, psychological research counseling, environmental policy-making, sociological planning, demographic investigation, pharmacological development, contraceptive distribution and sales, mass advertising, and public legal service provision.

As if that were not enough, the current Democratic administration in Washington—aided and abetted by the Democrat-controlled Senate—is the most ardently pro-abortion in American history. With a bevy of executive orders, appointments, and administrative policy changes—to say nothing of its 2,407-page monolithic, partisan “health–care reform” legislation, which removed the longstanding ban on federal funding of abortions in favor of a much more easily overturned executive order—the abortion industry has logged more gains during this administration’s short tenure than in the rest of its history combined.

Yet the great divide persists. Despite its obvious cultural clout, its cavernously deep corporate pockets, and its carefully crafted public relations efforts, the abortion industry has yet to prevail in the battle for the hearts and minds of most Americans. Public opinion polls conducted during the first year of the Obama administration found that 51 percent of Americans now call themselves “pro-life” on the issue of abortion, while only 42 percent call themselves “pro-choice.” In addition, the number of Americans who favor making it more difficult to obtain an abortion is up six percentage points in just five years. In 2005, 59 percent of respondents agreed it would be good to reduce abortions. Today, 65 percent take this view. One poll also found that fewer Americans, and fewer pro-life advocates, are willing to compromise on abortion by finding some “middle ground.” Indeed, support for finding a middle ground on the abortion issue is down twelve percentage points among conservatives and six points among all Americans. Yet another poll found that 58 percent of Americans say abortion is morally wrong most of the time. Just 25 percent disagree, and the rest have no opinion. The poll found women are more strongly pro-life than men, with 64 percent of women asserting that most abortions are morally wrong, a view shared by just 51 percent of men. Meanwhile, still another survey found a majority of Americans, 52 percent, think it is too easy to get an abortion in America. That's up seven percentage points from two years ago, when 45 percent thought it was too easy.

As a result, Dr. Sproul’s incisive analysis in Abortion: A Rational Look at an Emotional Issue is as relevant and necessary today as it was in the last decade of the twentieth century. Indeed, he points the way to the only possible resolution of this deeply emotional issue.

This is has always been an enormously helpful book. Now it has been brought completely up to date and is more useful than ever. It is my prayer that God may be pleased to use this book as a means to provoke the church to boldly stand for truth, justice, and mercy in the midst of this poor, fallen world.
Posted by gileskirk at 6:25 AM

“Custom will reconcile people to any atrocity." George Bernard Shaw
Posted by gileskirk at 1:40 PM

Posted by gileskirk at 4:44 AM