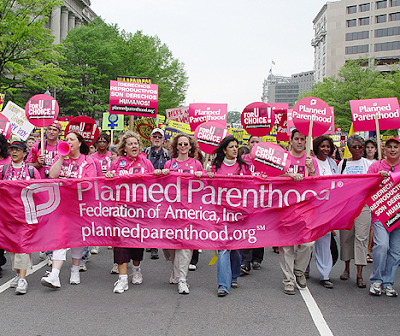 A new poll conducted by the National Right to Life Committee indicates just how successful Planned Parenthood and its cronies in the media have obscured and distorted the abortion giant's image.

The survey of registered voters, shows that a majority of Americans have favorable opinion of the vast organization. But according to NRLC executive director David O'Steen, this just shows that Planned Parenthood's favorable image "is really based on not knowing much about the organization," Indeed, according to the survey, eighty-eight percent of the population say that they are familiar with Planned Parenthood, and 44 percent say they're very familiar. But a majority doesn't even know that Planned Parenthood performs abortions--and this despite the fact that it actually accounts for more than a quarter of all the grisly child-killing procedures in the US each year, well over 300,000 each year.

Interestingly, the poll show that once people actually do become aware of what Planned Parenthood does in its killing centers all across the nation, the favorable opinion of the tax-supported organization vanishes altogether. For example, 53 percent say they would favor dramatic restrictions on child-killing, either prohibit all abortions, or allowing them only in cases where the life of the mother were endangered, or in cases of rape or incest.

Clearly, it is high time, for Planned Parenthood's hidden crimes to be revealed.
Posted by gileskirk at 8:05 AM